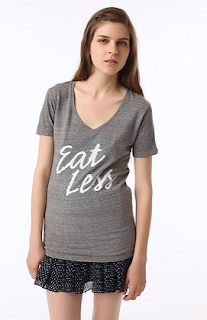 What are your thoughts on this new addition to the Urban Outfitters spiraling racks? Pulled from their online store over the controversy, you can now only get them in store. With its online description {when it was available} reading “Eat less or more or however much you’d like in this seriously soft knit tee cut long and topped with a v-neck.”… My guess is if that’s what they wanted to say, their was plenty of room on it to write just that.
I think…. personally that Urban Outfitters again has crossed the line. For me I feel that their is already too much out there that makes you read between the lines when it comes to Fashion. Now having a baby girl under my wing {in a mere 2 weeks} these types of things are not just water under the bridge for me. We need to take a stance and now condone this.
Huffington Post called several Manhattan Urban Outfitters locations and one sales associates confirmed that the store had the t-shirts in stock, but only in larger sizes. However, a sales associate at another store said they hadn’t yet received their shipment of “Eat Less” t-shirts. As for Urban Outfitters’ public relations, they did not return the Huffington Post’s phone calls regarding the matter.
What is your thoughts on this t-shirt? Have they crossed the line?
XO
Tairalyn
Tweet
Share
Pin
Share
0 Shares