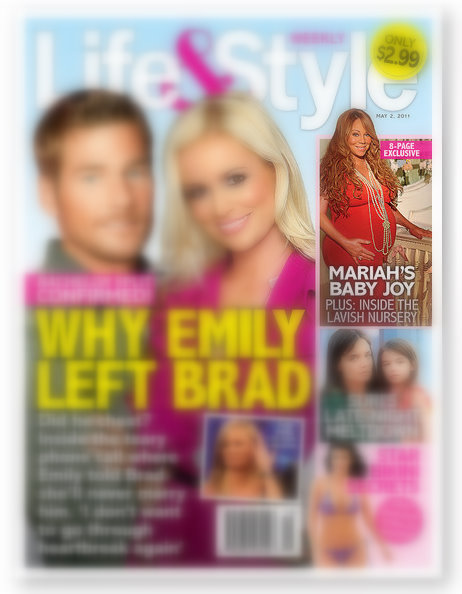 I can’t say I’ve ever really been a fan of Mariah Carey, from song choices to her horrible acting skills I just can’t seem to appreciate her, however I can say that I am a fan of her Twins Nursery.

Mariah Carey, 42 years old, is due May 14th with Twins {a boy and girl}. She has designed the room saying that ‘I wanted to create a beautiful, tranquil, cozy environment for the babies’. The room is trimmed with her signature motif – butterflies – as well as stuffed-animals, including a lamb and a huge giraffe, which was a gift from Sharon and Ozzy Osbourne. 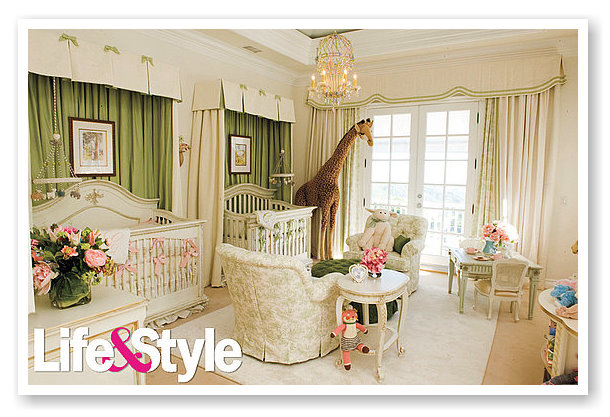 I think that all Celebrity Nurseries I take inspiration from, Not saying that I could even afford the thread used for the bed sheets in any of these rooms. Let’s be honest, celebrities have a little more in their budget thank most when it comes to designing their babies bedrooms.
Mariah called decorator Mario Buatta and AFK Furniture’s Gail Sedigh to help transform the room. ‘I feel like I’m bringing two individuals into the world, so I wanted to do more than cookie-cutter styles in blue and pink.‘
Mariah states she has also turned to her own music for inspiration. Oh Great! Lets hope its nothing from her GLITTER Soundtrack….. ‘The ceiling has orangey-pink clouds in a blue sky with golden stars twinkling. It’s based on two songs I wrote that are fan favourites: Underneath the Stars and Close My Eyes,’ she reveals.
All in all I can appreciate the design she has created with Decorators Mario and Gail. From the Soft Creams, Greens and Pinks to the Darling Furniture and Birdcage-style Lighting. I think this room took me off guard coming from Mariah Carey, however very happy to see she opted for a subtle, sweet look than what we normally see from her which is Loud and Proud.
This says nothing on the other-hand for their living room, that apparently boasts a nude picture of her and Nick taken during their pregnancy. Yes, Mariah! and I am certain that all guests coming to your house can’t wait to sit in your Living Room and feel extremely uncomfortable as they try and avoid eye contact with your headlights. 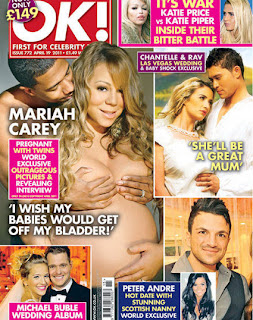