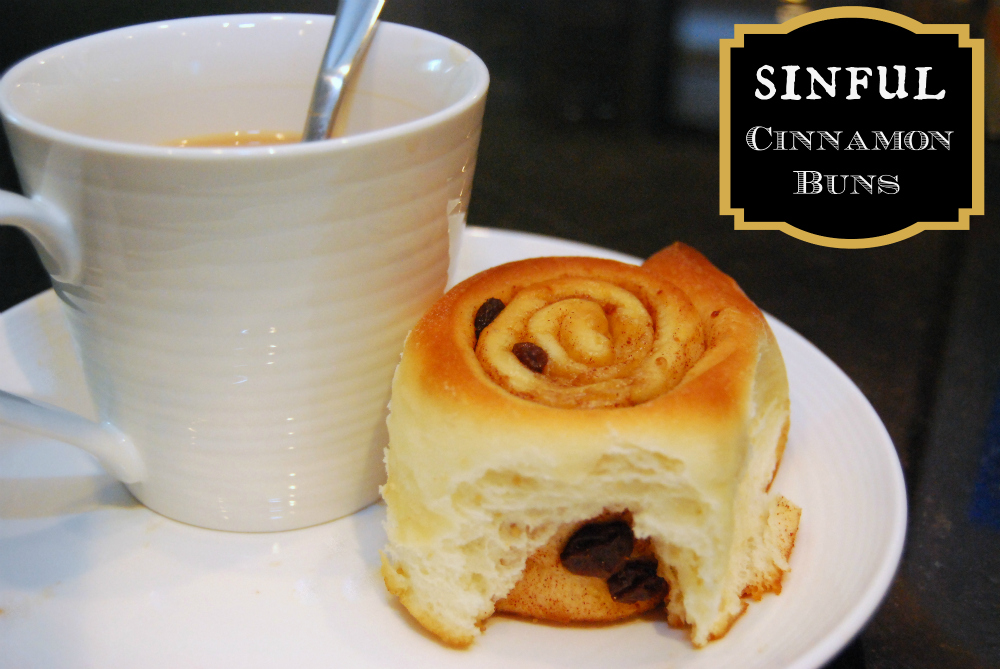 A dough, sprinkled with sugar and spices, rolled up tight and baked. How could one ever resist a Cinnamon Bun? I am at the mercy of this sugary sweet morning treat as long as they are in my home. It’s really a horrible thing when I make a batch and end up the only one who actually eats them. It’s really a sad sad week when this happens. Since this tragedy came about last week, I decided the next time I made a batch, it would be without the cream cheese frosting, making it not such a guilt-full bite. *and by bite I mean dozen, we all know I’m the only one eating them*
Do I think their is a healthier way to make a Cinnamon Bun? Of course!
Do I care enough to take the time out to research, and bake a trial? No!
END. OF. STORY.
Here are my Sinful Cinnamon Buns… I would tell you to “enjoy”, but who’s kidding you’re going straight to sugary sweet heaven.
Click here for your *Printable Recipe*
***

METHOD
Starting off with the DOUGH, in the microwave, heat milk and butter up until the butter melts and the mixture is warm to the touch. In a large bowl, combine the milk and butter mixture, a cup of the flour, sugar, egg, yeast, salt, and vanilla. Mix until well incorporated. Adding the rest of the flour slowly until a sticky dough forms. Turn the dough out onto a lightly floured surface and knead until smooth and elastic. If your lucky, and have an stand-mixer, USE IT. Avoiding all the mess and arm work out.

Spray a large bowl with butter pan, or coat with butter and transfer the dough into the bowl, turning to coat. Cover the bowl with plastic wrap, then a kitchen towel. Let your dough rise in a warm, draft-free spot until doubled in volume, about 2 hours. *I put mine in a 200° F oven that I had just turned off*

Now, for the FILLING. Mix together the brown sugar and cinnamon in a bowl. Set aside.

Punch down the dough *get your weeks frustrations out now ladies* and transfer to a lightly floured work surface. Roll out to as big as a rectangle as you can. Spread the butter evenly over the dough, and sprinkle the cinnamon sugar mixture. Begin to roll your dough into a log and at the end of the roll, dab with a bit of water and roll all the way to seal.

Spray or lightly butter your pan{s} and divide the rolls evenly between them. Once again, cover the baking pans with a towel and let rise in a warm, draft-free spot until doubled again in size, will probably be at least an hour *your patients will pay off – I promise*.

In a pre-heated oven at 375° F, position your racks in the center. Bake the rolls until the tops are just golden brown. This should take about 20 to 25 minutes. Remove, and immediately transfer to a cooling rack.

As for the GLAZE, combine the cream cheese, butter, confectioners’ sugar, and vanilla extract and mix until smooth. *hold back on dipping your fingers in just yet* Add your milk, slowly, until you reach a runny consistency. Dip the tops of the cooled Cinnamon Buns in the glaze and serve immediately.