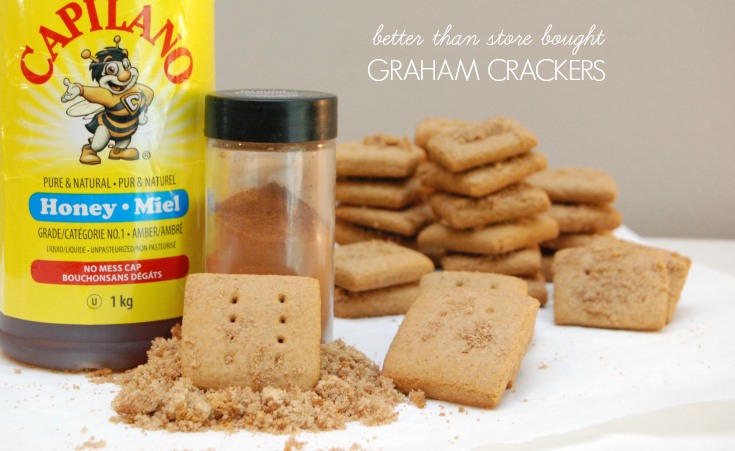 This statement is really quite bold, better than store bought, but I stand behind it whole-heartedly. These little sweet golden gems are better than any graham crackers that money can conveniently buy; just ask Sofia!

Snagged the recipe after seeing it on ‘the first year cooking and creating‘, seriously Beth is a genius in the kitchen, I’m sure she is brilliant in other area’s too, but seriously when it comes to the kitchen, she owns it! Thank you Beth for reminding me that homemade is far better than store bought, by a long shot; and can you say custom. Make them how you wish, soft and chewy or traditionally crunchy. Sofia and I chose to go soft on one batch and crunchy on another, both are magnificent. Not to start thinking us fun uses for them other than vegging out on the couch like we’ve been currently doing. From s’mores to ice cream sandwiches to…. chocolate fondue dipper. YUM!

Okay, so before I get in too deep and am unable to lift my own body weight, I share with you “better than store bought Graham Crackers”!

Start off by combining the Flour, Brown Sugar, Cinnamon, Baking Powder, Baking Soda and Salt in a medium bowl. Next you’ll cut in the chilled Butter, by using your hands or two knifes, which ever works best for you, mixing it into the dry ingredients. Add your Water, Honey and Vanilla, mixing with a wooden spoon or on low in your stand-mixer suited with your dough paddle. If you’re finding that your dough is dry you can add more cold water 1/2 tsp at a time until a dough ball forms. Either wrap the dough in plastic wrap or put in an airtight container and place it in the fridge for 30 minutes.

While your oven preheats to 325 degrees F, remove the dough from the fridge and divide it in half. Put one half back in the fridge while you work with the other. Roll our your dough until it’s a desired thickness, I chose about 1/4″, make sure you sprinkle your surface with a little flour, you’ll need it. Once your dough is rolled out use a pizza cutter and make squares and finish off by poking them with a fork to make holes. Sprinkle them generously with your Cinnamon-Sugar mixture and put the first batch in the oven. Bake 15 minutes for a soft and chewy graham cracker or else 20 minutes plus for a rather crunchy more traditional cracker. Once completely cooled you can store them in an airtight container; if they’ll last that long in your house.

Easy and yummy, so simple even Sofia helped with the cutting and poking. What toddler doesn’t like to cut and poke with encouragement. I could be paying for this one down the road, until then… HAVE FUN