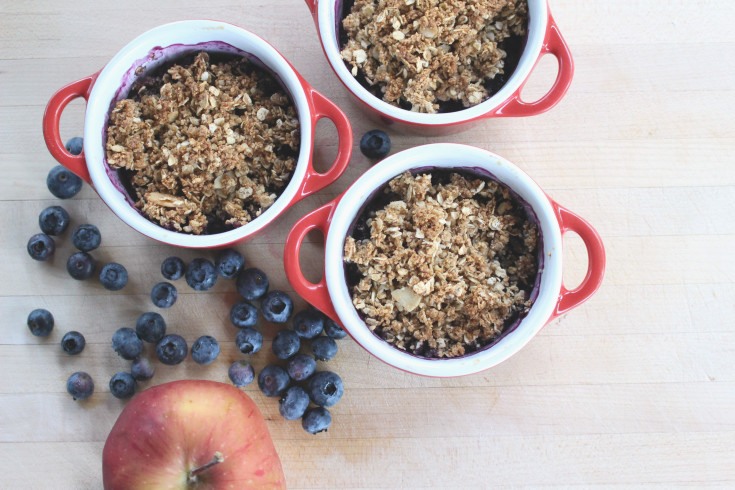 Crumble is seriously my most favoritest dessert, eaten straight from the oven after it’s been topped with ice cold Vanilla Bean Ice Cream, there is no better indulgence in life. The best part, besides the deliciousness would have to be the ease of making a crumble. Literally throw whatever fruit or berry you have kicking around that sound scrumptious together into ramekins, top with a ridiculously easy crumble topping and bake. Like I’m talkin’ no recipe needed peeps, straight from the heart gut.

Let me tell you how we made this one as we had to make a few modifications since a third of our house follows a Paleo diet:

1. We found fresh blueberries and an apple in the fridge, cutting up the apple in pieces around the same size of the blueberries we threw them in a bowl to antiquated.

2. Next I dashed a little lemon juice on our fruit friends and drizzled a little maple syrup, just to lightly coat. Mixed it up gently and divided it into my three ramekins.

3. We then grabbed a clean bowl and grabbed a handful of oats, maybe a handful and a half, poured in about half a handful of ground almonds and sprinkled the duo with cinnamon. Put in a spoon of brown sugar and drizzle a very little bit of maple syrup atop while mixing, stop when you see it all come together. Be sure not to over do it, just enough syrup so that it starts to combine.

That’s it people, no word of a lie, it’s really that simple. This is why I love crumbles so much, they’re so easy to make, no real ingredients that will send you out to fetch and of course uber delicious. We made them in the afternoon and then threw them in the fridge BEFORE baking them. Then after we brought dinner to the table I popped them into the oven so that they would be ready just after we took our lasts bites. Topped it with Vanilla Bean Ice Cream (and coconut ice cream for those that are male in the house) and we dig right in.

WHAT’S YOUR favorite crumble combo? Seeings as I have a garden full of Rhubarb I think next we will try a Strawberry Rhubarb combo. It works wonderfully in a pie form, so why not a crumble right?