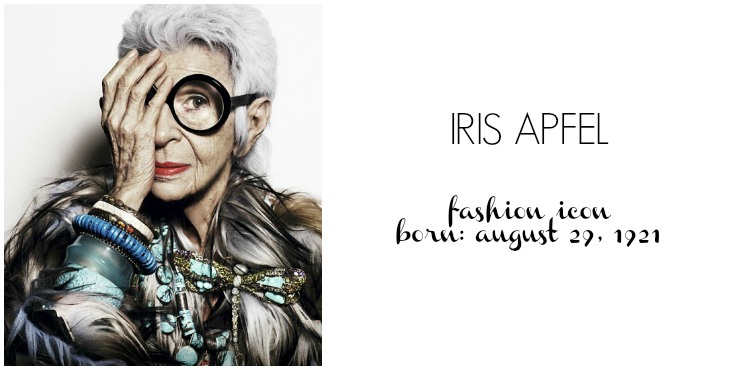 I knew of Iris before today, but never knew really knew her; her story was no memory of mine. I knew of her amazing style, and her gorgeous personality, as spunk like this at 92 does not go unnoticed. However it wasn’t until I saw an accessory in the junior section and had Fifi try them on for an Instagram-OPP that had me crave knowing more about her. Why was this woman so fashionably confident. She packed on more accessories in one evening than I do in an entire month; yet she pulled it off flawlessly. How? Why? Who was this woman?

{information gathered from wikipedia} Born Iris Barrel in Astoria, Queens, New York, Apfel is the only child of Samuel Barrel, whose family owned a glass-and-mirror business, and his Russian-born wife, Sadye, who owned a fashion boutique.

She studied art history at New York University and attended art school at the University of Wisconsin. As a young woman, Apfel worked for Women’s Wear Daily and for interior designer Elinor Johnson. She also was an assistant to illustrator Robert Goodman.

In 1948, she married Carl Apfel. Two years later they launched the textile firm Old World Weavers and ran it until they retired in 1992. During this time, Iris Apfel took part in several design restoration projects, including work at the White House for nine presidents: Truman, Eisenhower, Nixon, Kennedy, Johnson, Carter, Reagan, and Clinton. She is now a professor at The University of Texas, Austin.

Apfel still consults and lectures about style and other fashion topics. In 2013, she was listed as one of the fifty best-dressed over 50s by the Guardian.

Wikipedia only gave me a small taste of this fashion icons life, I needed more. After researching online, I find she is really quite witty. Some interviews she gave, and quotes she’s been caught saying had me in stitches, I can only hope that at 92 I will be as half with-it as Iris; and even a quarter as chic.  Some of my favorite moment from interviews and quotes from Iris I just have to share, I know you will love them:

From an interview posted via Lucky Magazine:

Your closet is infamous for being packed full of amazing things. If there was a fire and you could only grab one piece, what would it be? Oh I wouldn’t know! If you have five children and there was a fire, which one would you grab?

My look is either very baroque or very Zen – everything in between makes me itch.

Coco Chanel once said that what makes a woman look old is trying desperately to look young. Why should one be ashamed to be 84? Why do you have to say that you’re 52? Nobody’s going to believe you anyway, so why be such a fool? It’s nice that you got to be so old. It’s a blessing.

This woman is an inspiration, not just for her accomplishments, her style, and her witt, but her sense of confidence in owning everything she puts on; and I means everything. This woman lives by the motto “put on all your accessories, look in the mirror and then add 10 more piece”. This lady knows the true meaning of style, and that’s in the accessories you wear.