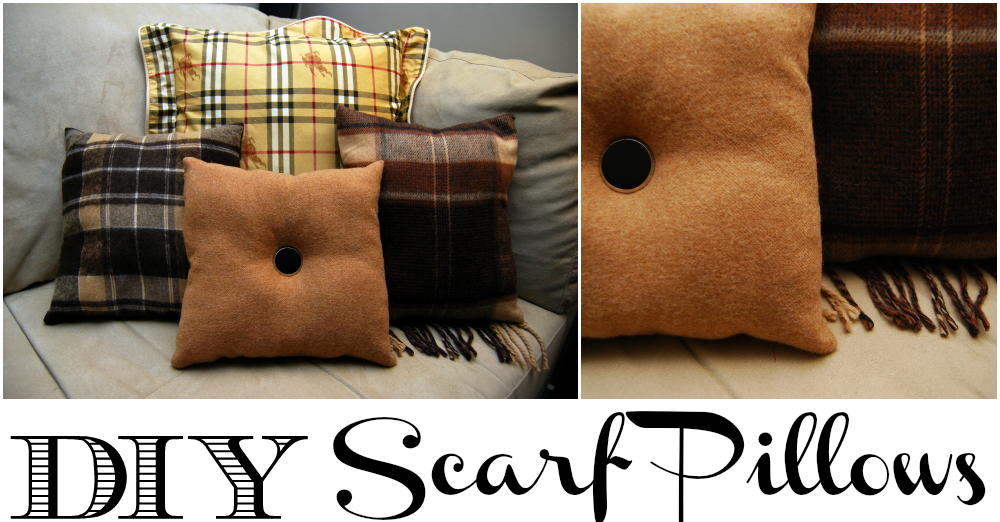 Had an “ah ha” moment the other day when I was thinking on how I could jazz up my boring beige couch. Don’t get me wrong, I love my couch… its where all the love and cuddles happen in my home, however it can tend to be the elephant in the room as its very… well big, and beige. Just before I attempted to beat my old Olympian record of getting out the door, child in hand, in less than 15 minutes, I draped my scarf over the back of the couch in preparation for the gun fire starting cue. I thought to myself, “now wait moment here, this scarf looks better on the couch than it does draped around my neck”. Not only was this the beginning of my Oprah “ah ha” moment, but also a big blow to my ego

*quickly builds a bridge and gets over it*

Decided to find 3 scarves that would not only compliment my couch, but looked better on it than me. After successfully finding what I was after, I got right to sewing, stuffing and fluffing. These babies are just my favorite thing going right now, cozy, chic and well now instead of drowning out my skin tone they brighten up my couch.

I chose one of the scarves particularly because of it’s fringe. Thought it would make for a sweet detail on one of the cozy new pillows. How I managed to keep the fringe on the “good side” of the pillow was actually quite simple. I folded them inside and ironed them down, it made for less of a fight while I sewed. Hopefully the pictures will make more sense than my fabulous explanation. Don’t forget when you’re sewing your pillow, leave a corner open to stuff {I left about 2 inches}. Just enough to make it easy to flip right side out AND pack with stuffing.

After the pillows were sewn, I stuffed and sewed them shut. I chose to go light on the stuffing as I wasn’t sure if I was going to have enough for all 6 pillows. Wished I could have stuffed them a wee bit more, just so they look like they are about to burst. Ah well! Next time!
Ended up finding a really lovely button that I used to chic-ify the beige pillow. All in all I think they turned out just lovely. Would I do it again…. heck yes! The question is, will you be sorting through some of your old scarves and giving this Designer on a Dime DIY a try?