For us mornings are very slow going, something I am very much okay with. You see, mornings are not my thing, so curling up on the couch, watching cartoons, while Stella cooks a wooden breakfast is something I not only love, but encourage at the crack of dawn. I make myself a tea, start to put together Sofia’s lunch for school and think about Breakfast. Like I said, I do this at a sloth-like pace, it’s really quite the sight. Maye this should’ve been a vlog? 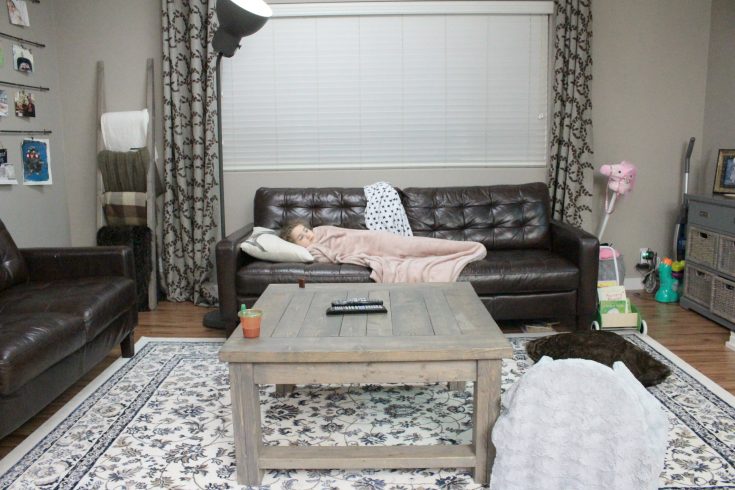 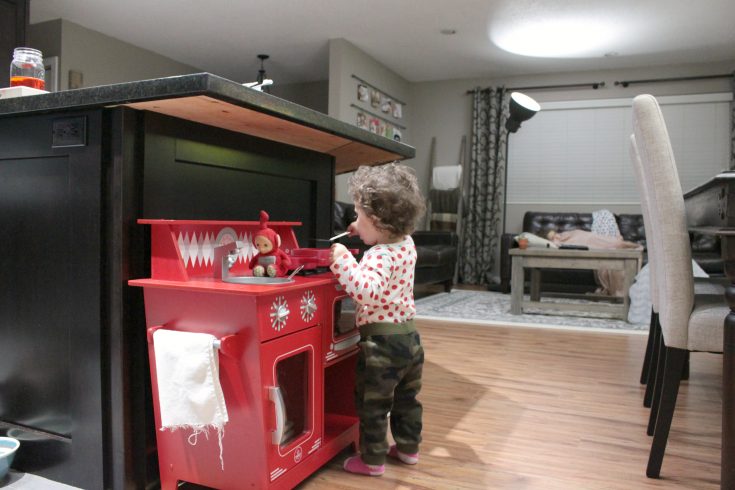 It’s at about 8:40am when the panic sets and I realize the snails pace we’re all functioning at really needs to change. The caffeine at this point takes over and Sammy and Sofia make it out the door just in time. It’s now up to me to make the magic happen, I bathe Stella after breakfast, because we love to wear food as much as we like to eat it, clean up from the morning and make and pack Sammy’s lunch for work. 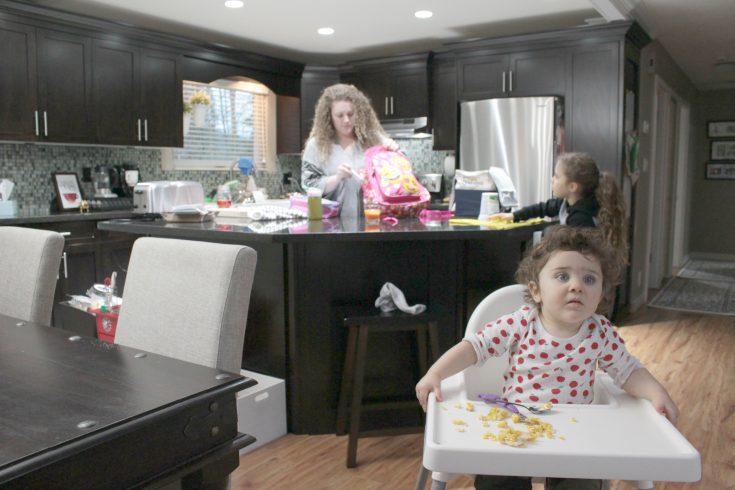 I make lists for my lists; anyone else? Have it be the night before or first thing in the morning over tea, I make a little list of things that must get done in the day. Making the list feels so good, game-plans are my jam, but it’s the marking them off that feels just so damn rewarding. We tackle all-the-laundry, including Christmas bedding on a certain someone’s bed who just refuses to admit it’s over, and towels because we bathe a lot in this house (I’m lookin’ at you Stella!). While all this is happening we’re serenaded by The Wiggles (you know who I’m talking about right? Ready. Steady. Wiggle.). They’re playing on the TV all day, everyday. It’s the way we roll. 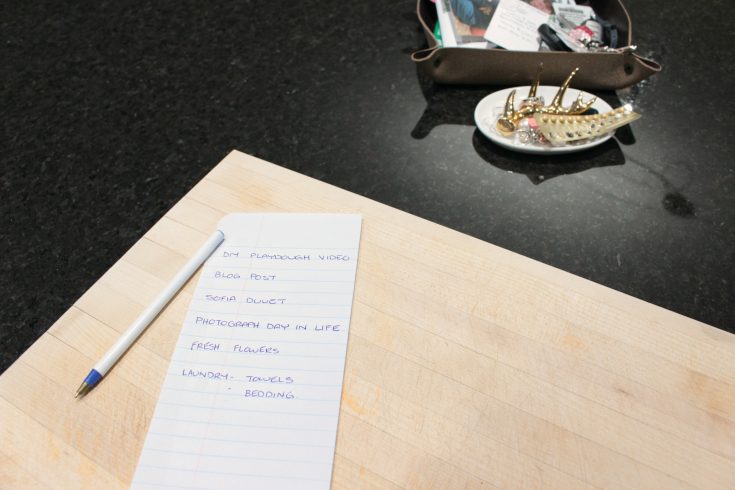 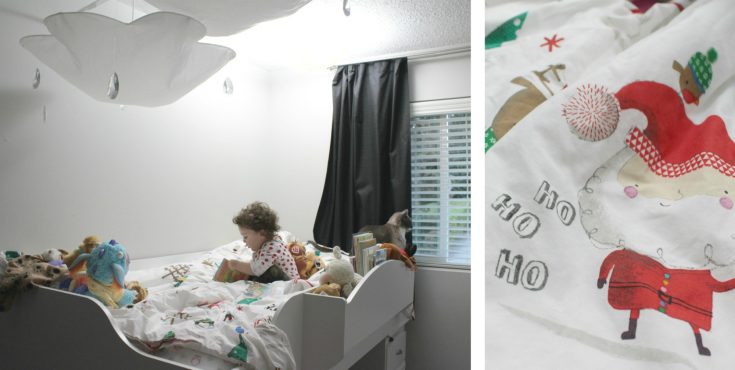 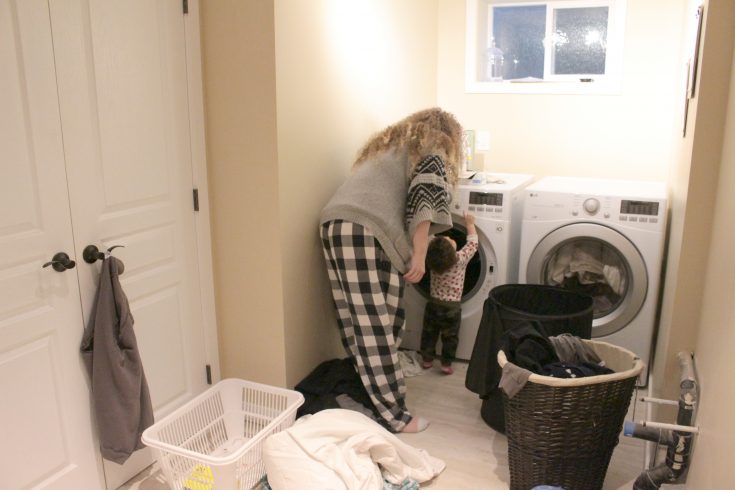 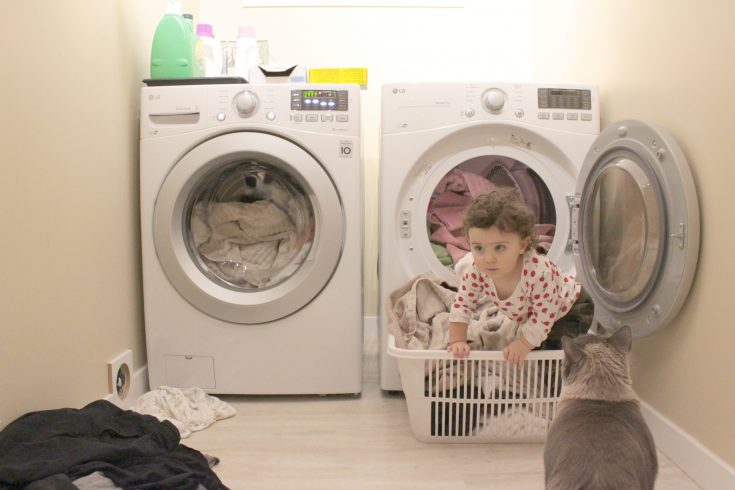 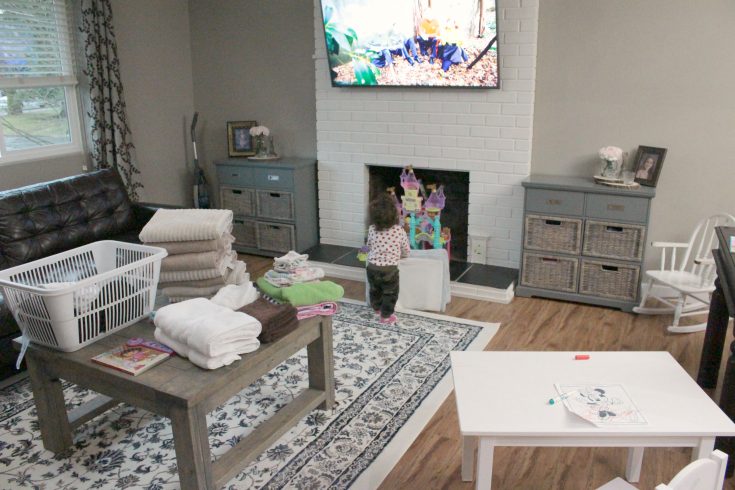 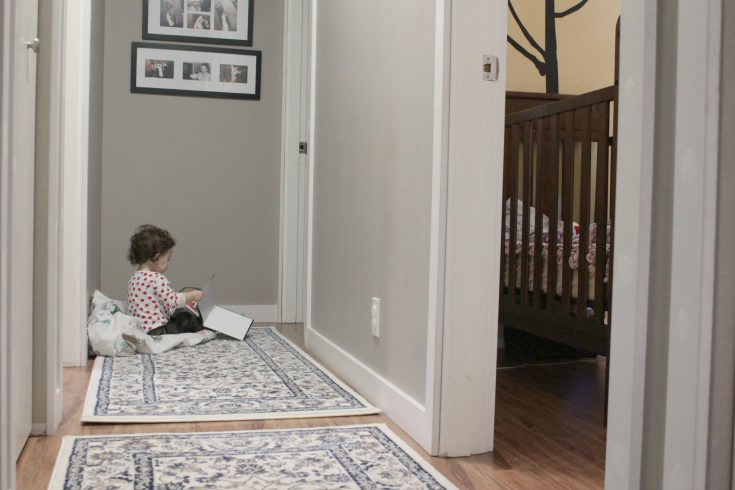 This is probably my favorite part of the day and if Stella could talk surely she would agree, but just before lunch Stella and I get our mess on. Have it be play based or craft we do what feels right. This day she did some mess-free finger painting and I re-surfaced the girls little tables. After our fun we had lunch, which led up straight to the bath and snuggled into an afternoon nap. 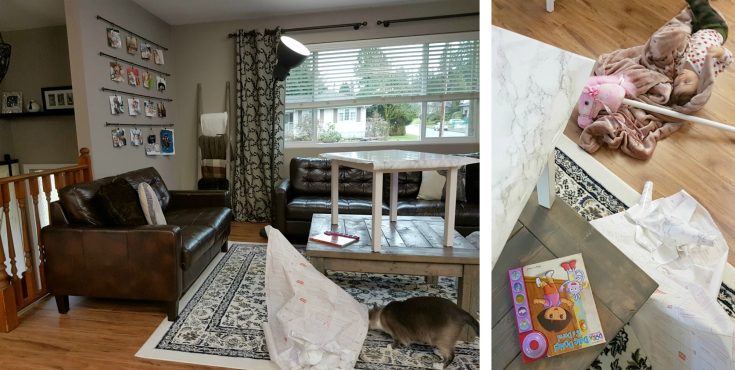 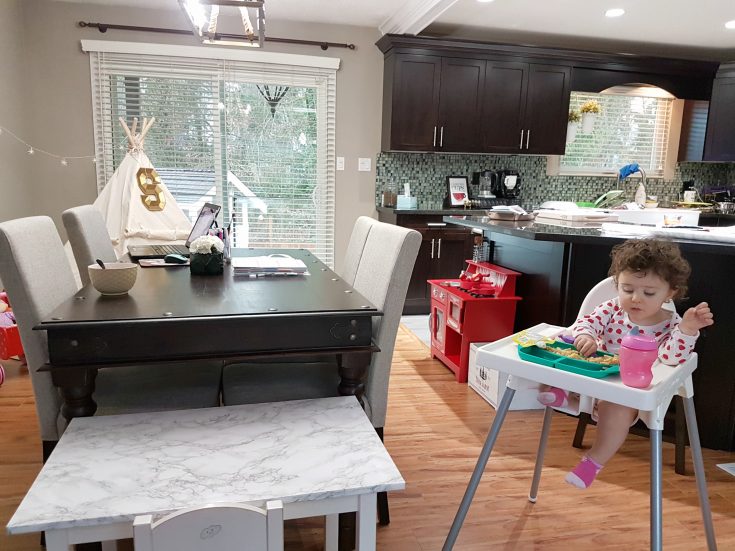 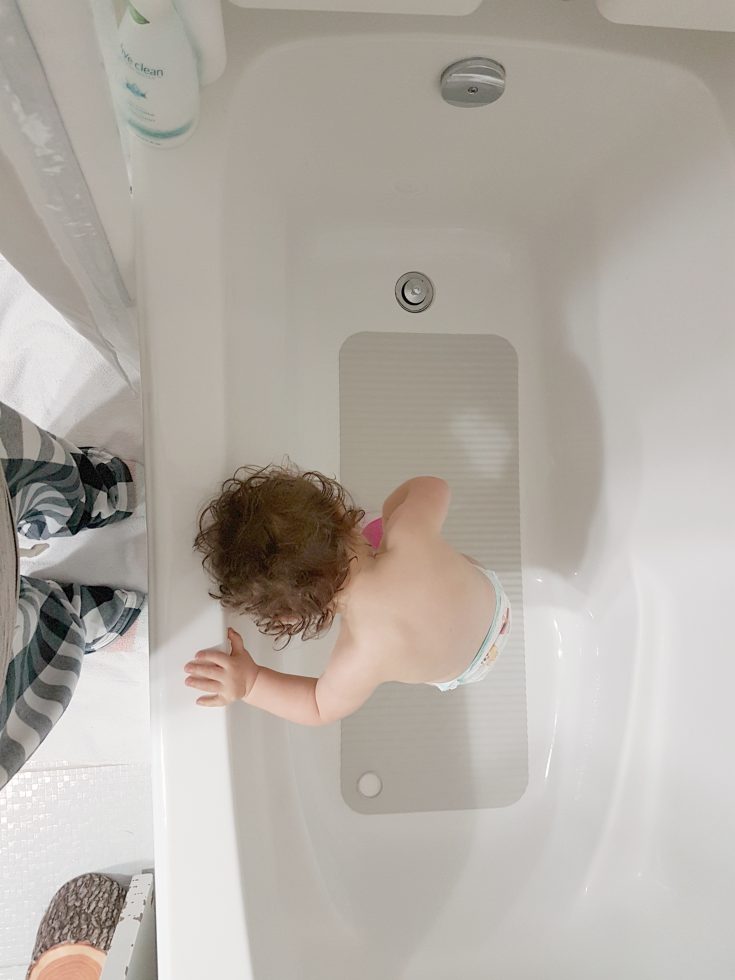 The moment Stella’s head hits the pillow, I speed clean from the afternoon of fun, steep myself a piping hot cup of Tea and get straight to work. This day we had a vlog to film, DIY Edible Playdough. We set everything up and got straight to filming. Finished it off with answering a few e-mails and prepping an after school snack before Stella woke at 2:30pm. She had 10-minutes to play with a fresh batch of Edible Playdough before rushing out the door to get sissy from school. 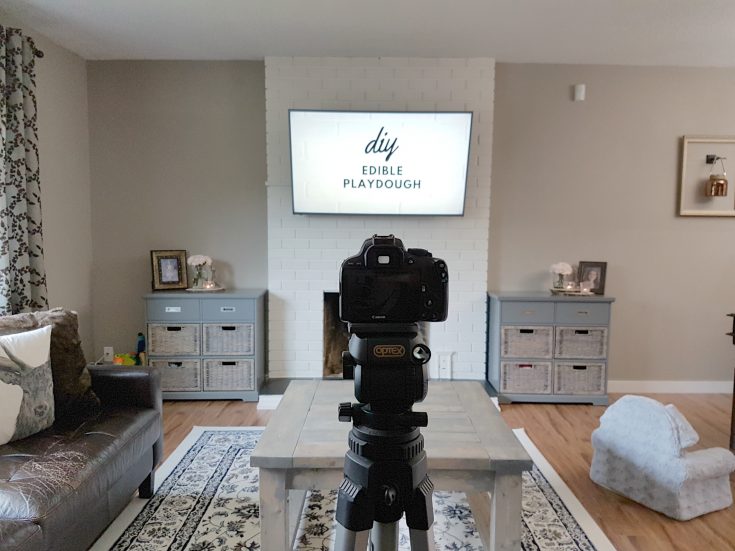 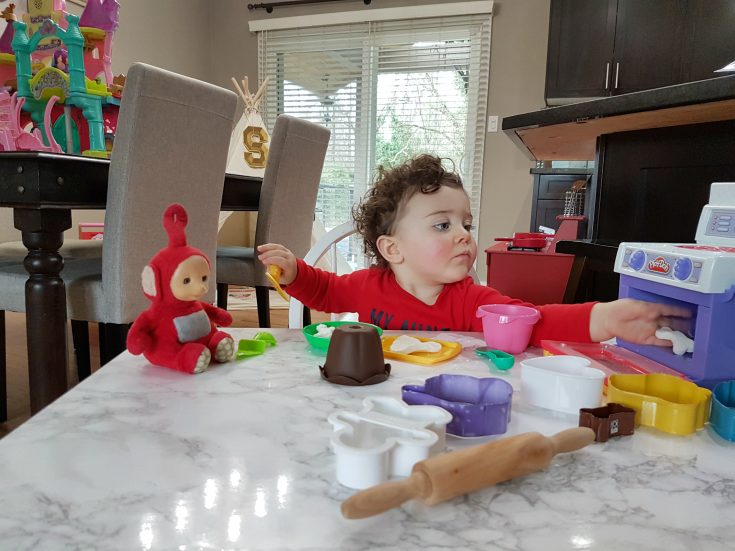 With a tummy full of Edible Playdough we packed in the car and headed off to get Sofia. The day however took a bit of a turn, and with an extremely emotional day at school I chose to end the day-of documentation here for obvious reasons. We got to the car, calmed down enough to dry our tears, and I got her side of the story. Okay, so you guys, when did grade 1 get so tough. I don’t remember it being this way back in the day, not even a little. 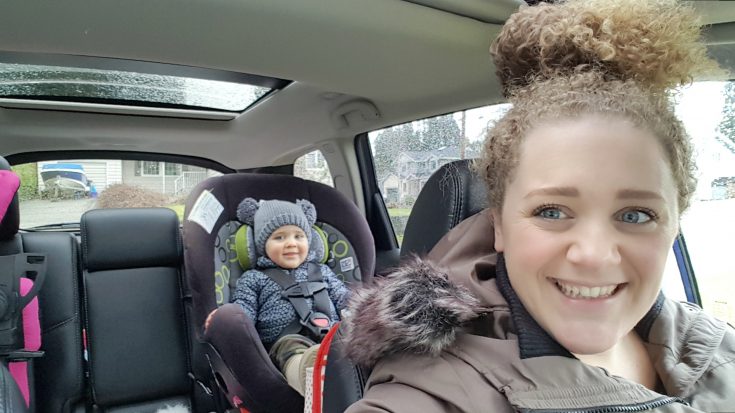 After getting home, we all had some tea, because tea makes everything better, and the girls played with Playdough as I mama-beared my way to my inbox to e-mail her school (and make sense of the days happenings). If I did not have 2 little hungry bears to feed I easily would’ve sat and stared at my inbox until a reply came back, but off I went in making dinner for me and the girls, including one extra-big helping for Sammy’s lunch the following day at work.

Dinner was devoured, baths were had, knots were brushed, milk sipped, books read and a whole lotta’ stalling before bed was going on. You know the drill, I’m not telling you something you don’t already know. Heads were kissed, blankets tucked, lights out.

Any guesses on what I did next? I steeped myself a cuppa’ tea, cleaned up from the evening, put away all the laundry and sat down at the dining room table and got to work. I uploaded the footage from the afternoon of making Edible Playdough and began editing. The night came to an end after the vlog was complete and the clock read 1:26am. I contemplated leaving Sammy on the couch to sleep as I hate waking a sleeping husband as much as a sleeping baby, but I knew he was better off. Woke him up, and off to bed we went.

Now that I think of it, no wonder we’re not morning people!

HEY! Did you know this was a Blog Hop?

Myself along with Carolyn (of Moments in Mommyland) and Andrea (from Mama in the City) came together to showcase (and compare) what the lifestyles of mothers who live in 3 completely different areas of the same province (Beautiful British Columbia!). From the Country life, to living in Suburbia and Downtown City living.

Go on over and check them out… but before you go, tell me what kinda’ mama are you?