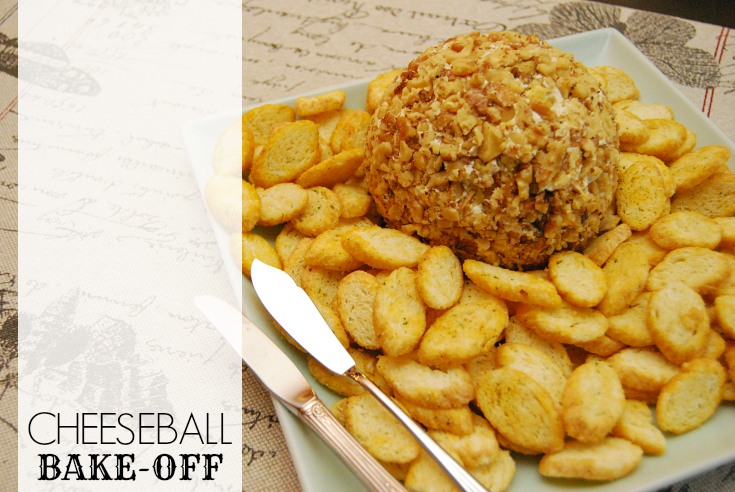 We’re at it again my friends. The bake-off continues this month, however this time we went from something sweet and decadent {last month was Paula Deen’s Apple Strudel}, to something creamy and savory. A traditional cheeseball; and can you believe this was my very first time ever having made or even tasted one. Pretty sure I have broken a law somewhere, take me to jail, I swear this is really a sin.

So easy to make, so beautiful to look at and so damn tasty to eat!

So without further ado, I give you three versions of the traditional Cheeseball, including recipes. Starting with mine which is a successful guilty pleasure, Hillary from Hillary with two L’s with the Guilt-Adjacent version and Jenn from Mama. Papa. Bubba. which is completely Guilt-Free.

DIRECTIONS
With a pair of kitchen scissors, chop up the bacon and fry on a pan on your stove top. Once done, remove and drain fat off on a paper towel

In a medium-sized mixing bowl, combine cream cheese, bacon, mayonnaise and diced green onion. Mix well, cover and place in a metal bowl to store in the fridge for at least 4 hour, better if it was overnight.

Remove from the fridge and form into a ball {much easier to do once cold}, roll ball into a plate of chopped pecans, rolling until the entire cheeseball is covered.

Place on a platter, serve with crackers.

Curious to see how Hillary and Jen did with making this recipe healthy? Pop over to their sites and see how these two health ninjas did in the kitchen. Once again, so impressed with them both! Almost makes me want to give up full-fat cheese all together. Who are we kidding, I’d have to be in a coma to kick that habit!