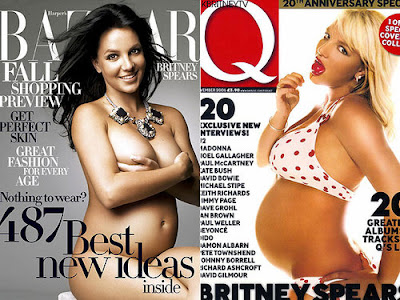 {This is beautiful, but its Airbrushed beautiful…their is a huge difference}

Really? If I would have known this I would have chosen this Trimester first.
Now don’t get me wrong – I’m no Brittany Spears Magazine Cover Flawless – I’m talking “real” beauty without Make-up, Professional Photographer and Airbrushing!


I don’t know about the other preggers out there, but I am finding that not only is my skin just flawless but my hair is larger than life and my nails are just beyond fabulous {and if your wondering what that sounds was, yes, it was the sound of knocking wood}.
Beauty sure is a friend of mine in this second trimester – which after doing some more research, looks like that’s a fairy common thing. This is what also leads me to the verdict on why you see so many crying mommy’s at the tail end of their pregnancy… they are PISSED that their nails are shorter than nervous nancy, their hair is falling out and their skin looks more like a bad allergic reaction.


Any man out there that tells us women that we are too emotional or better yet, are crazy when we are pregnant are completely right … however I dare you to tell me this in person. Buddy, do it… my nails would love to sink into your ugly little face!


Here is what I found:
{Information pulled from babycenter.com}

Is it common for your hair to get thicker when you’re pregnant?

You may find that your hair feels fuller when you’re pregnant. But you’re not actually growing more hair (and the strands themselves aren’t any thicker) – you’re just losing it more slowly than you usually do.
Here’s what’s going on: Normally, 85 to 95 percent of the hair on your head is growing and the other 5 to 15 percent is in a resting stage. After the resting period, this hair naturally falls out (often while you’re brushing or shampooing your hair) and is replaced by new growth. The average woman sheds about 100 hairs a day.
During pregnancy, higher levels of estrogen prolong the growth phase, resulting in less shedding of hair and thicker tresses. Some women also notice that their hair becomes shinier during pregnancy or that it changes in texture (curly hair might become straighter, for example).
Your postpartum locks probably won’t be as luxurious. After giving birth, the growth/rest cycle goes back to its previous pattern, so you may notice more hair falling out.
Not all pregnant women notice dramatic changes in their hair before and after giving birth, though. Among those who do, the changes tend to be more obvious in women with longer hair.

Is it common for your nails to grow faster?

Yes, although you might not notice the difference. Some pregnant women also develop harder nails, but others find that their nails are softer or more brittle. These changes are temporary, and your nails should return to normal sometime after you give birth. If you get all the nutrients your body needs, your fingernails should be in good shape three to six months after your baby arrives. (Your toenails could take nine months to a year.)
In the meantime, you can protect your fingernails by wearing rubber gloves when you’re doing the dishes or cleaning, and by using moisturizers on your hands, especially on the skin that surrounds the nail and on the nails, particularly if they’re brittle.
Now I found no information which lead to why my Skin is just looking flawless these days, I actually found many that suggested the compete opposite. So what I have narrowed it down to is the new Skin Regime I’m doing thanks to Face, Hair, Make-Up and Mommy Guru Kandee Johnson {I have an online crush on this little missy, she seems like such a beautiful person inside and out}. She did a post a long while ago that I got lucky enough to stumble upon and I have been doing it ever since and “boy oh boy” is it ever brilliant!

Here is the Vlog that she did for how to naturally ex-foliate the skin and I will swear by it, I have already turned a few of my girlfriends onto it and now their husbands can complain about the bathroom counters being cluttered up with Lemons, Sugar and Cotton Pads.
So for the ladies out there in your first Trimester and are hating the mirror at the moment… Just cover it up for now, in a mere few weeks your going to be wishing the mirrors that your husband wanted on the ceiling were installed ages ago.
xo
Tairalyn
Tweet
Share
Pin
Share
0 Shares